For this event, the evening series moved to the circuit 10 mile course and it was thought times might prove much slower on the rolling roads with a number of awkward twists and corners. 40 riders took to the start line and it was the Hucks brothers, Ollie and Sam, who contradicted this as they sped round the course in rapid times. Ollie's 20.44, at near 29mph, was just blistering and Sam’s 21.40 was equally impressive (3 years younger than Ollie), taking second overall.  Ollie’s time was probably a course record but needs checking. Also impressive was Joshua Avery’s time of 21.50 on a road bike. Further down the field many other riders were clearly having a good evening. Veteran ladies Helen Roby and Dena Ford were having their own battle, Helen coming out ahead with a 25.24 (and first lady on the night) against Denas 25.48. A little further back Anne Marie Benoy came home in 26.46, closely followed by Jo Gundle in 26.52. Riding a road bike Caroline Goodman showed she was not far behind in real terms with a very handy 27.16.  Amongst the vets Pete Lavery produced a very quick time of 23.39, but vet Pete Smith charged round in 24.01 to score the biggest vets plus on the night and take the vets first prize on standard with a plus of 5.21.

The Juniors continue to impress with Adam  Charleston  grabbing fourth place on the night in 21.58 followed by 16 year old Daniel Goodwin in 23.10 and 15 year Cormac Nisbet in 23.11.

Senior Ladies
Best turnout yet but only two eligible riders so no award. 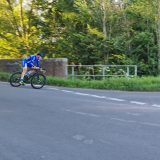 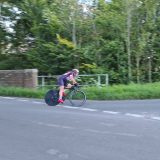 40 riders lined up again the following week and it was Karl Alexander who really bossed the evening with an impressive display of power to finish in a very rapid 20.33, which must be a new course record. He was followed home by Adam Charleston in 21.24, Jamie Copus third in 21.59 and Dan Shoobridge 4th (and the first on a road bike) in 22.08. Further back the battle between Helen Roby and Dena Ford became even more heated as Dena closed the gap with a 25.20 against Helen’s 25.11. Amongst the vets another battle was hotting up with top spot going once again to Pete Smith with a 23.47 that gave him a vets plus on standard of + 5.36.  He was closely followed by Malcolm Freeman, whose 25.32 gave him a vets plus of 5.23. In third place Chris Ford produced a vets plus of + 4.52 from his 23.37 ride on actual.  Bob Lambert's normally pre-eminent position as top vet on standard has been challenged, but he finished in a close fourth on standard with a plus 4.50. So he must not be counted out yet. Another vet charging up the rankings is Gareth Anderson who was second fastest vet on the night with a 23.13 which was a massive improvement from his previous weeks time of 24.58 on a road bike.

And a special mention must go to Cathy Roberts whose 27.45 came after spending the whole of the previous Sunday supporting husband Jeff who rode in the Breckland 12 hour TT.

When all the dust had settled an overall look at the times for both weeks suggest the circuit 10 is proving surprisingly quick compared to the usual out and back Longwick 10 course. One wonders what will happen when the series returns to the traditional course for the last two events of the series. A head to head between Ollie Hucks and Karl Alexander could push one or even both to a 19 minute ride. This feat has not been seen for over 16 years, when National TT Champ, Stuart Dangerfield  sped round the course in 19.42 following Cofidis pro David Millar’s ride a couple of years earlier  in 19.08. Both rides being done on the slightly shorter old 10 mile course. 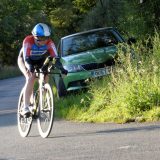 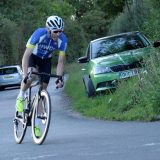