Sunday 16th August saw an impressive HWCC turnout at the West London Combine 25 Mile TT. Despite the overcast and damp conditions the H25/4 course was clear of standing water and witnessed some fast times, especially considering the slow reputation of the course.

Leading the pack for HWCC was Adam Charleston with 54.23, an extremely well paced effort and looking aero right to the line. Further solidifying his lightning form from Aston Hill the previous week. Phil Porteous also impressed with a 1.02.37 looking rock solid as always and improving all the time. Up next was Dave Yates who completed the rolling course with a 1.06.08, showing strength after consistent times in the 10 miles this season. Save of the day has to go to Jeff Roberts who was going well until his saddle sheered off! Unbelievably he kept the bike upright and his chamois in tact!

Despite Dena’s navigation Gareth Anderson took an extra roundabout adding over 2 miles to his ride. Never the less his average speed would have put him just under the prestigious hour mark, top work! The embarrassment didn’t end there as Jonathon Chadwick celebrated his quick 1.04.02 with a trip over the bars in the car park, heal fast!

Bob Lambert raced home for a time of 1.07.47 and as always managed his effort perfectly giving it everything right to the line, great to see! I was happy with my personal performance albeit slightly annoyed with the time of 1.00.1, dad won’t let it go!

To conclude a great turnout from High Wycombe along with some impressive times and all accompanied with a smile! 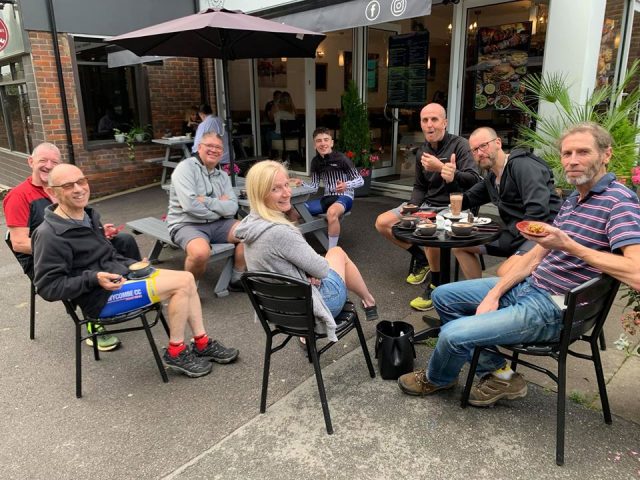