On the 3rd of April I participated in an U16 boys criterium race at Hillingdon race circuit. It was the first time I had raced at this specific venue so consequently my nerves were higher than normally. The start time of the race was 3:10pm which was hours after my past experiences, where they all have been in the morning. The race consisted of a strong field of approximately 35 riders, who evidently all were out to win, which was clear from the practice lap where all riders were fighting to get a good starting position. From past experience I knew I needed to work on my starting position before races, as many times before I had been caught out by a poor starting position, meaning that, as was shown in a race earlier this season, when I got dropped from the main group, so I made a big effort to get near the front early on.

Onto the later stages of the race, there began to be more attacks. One of the attacks that took place, was thought to have been possibly the race winning attack, gaining the most time from the peloton. There were many shouts from the group to close it down but no one was making the effort, and from previous races I knew that this was a recipe for a successful break away. Knowing this, I decided to move up the right hand side of the group and increase the pace to catch the break, I managed to do this within half a lap which I was very pleased about as it was the first time I had made any big influential decisions in a race before.

As the race was entering its final minutes, the group became noticeably slower for a minute or so, strongly indicating another attack would occur, for this reason I managed to weave through the bunch and grab 3rd wheel which I thought was a good position to neutralise attacks without having to battle the headwind as much, meaning I could preserve the last ounce of energy I had left when it came to the final 3 laps. One event that I believe really altered the speed and alertness of the riders was the call from behind saying ‘guys there’s going to be a big attack soon’. This unquestionably sped the riders up to get an effective position to neutralise attacks if needed. As the bunch was progressing down the final straight at around 26mph, a sudden turn of events ended my race and sadly a few others behind me. I was placed in the centre of the bunch trying not to be close to the back when unexpectedly the rider in front of me braked as I believe a rider had cut in front of his line and possibly slowing down, this led to my front wheel clipping the rear wheel of the rider in front, sending me falling onto the ground onto my left side. Consequently I have suffered a lot of missing skin down my left leg, hip, and shoulder and my right fingers having the skin being torn off of. As well as this I have ruptured a ligament in my left shoulder which the doctors say will take approximately 6 weeks to heal.

This race I strongly believe held the most significant value when it comes to lessons that I have learnt. In this race I have learnt that if the bunch isn’t working together then you need to work and put the majority of your effort into catching the break to cancel any plans of a successful break away. As well as this I have learnt that the first 10 minutes of the race are always going to be the most difficult, although the pace will definitely decrease. Most importantly I have learnt the valuable lesson of never taking riding your bike for granted. Cycling is the most amazing sport, with a welcoming and friendly community but also the competitive aspect and the desire and fire within people’s hearts to push themselves to the absolute limit to take the best result possible. This period of time where I cannot ride my bike has already been the longest week of my life although I now truly appreciate how blessed I am to be able to ride my bike with HWCC.

I cannot express how grateful I am to everyone who has supported me and wished me a speedy recovery. Thank you, I can’t wait to get riding with you again! 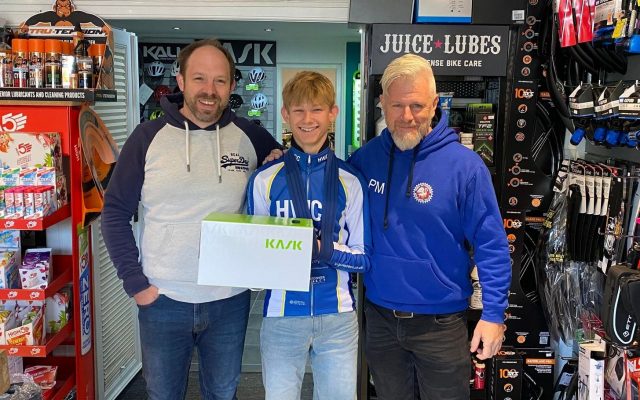