When the awful news broke amongst club circles that Margaret had passed away suddenly, High Wycombe Club Vice President John Day said the club had lost its matriarch. This was undoubtedly true. She always knew the way home and for so long had a wide command and understanding of most things cycling. Margaret helped to shape and steer the club’s culture over a long period of time, and many a past Club Chairman through the years had the benefit of her advice and guidance. The club was her second family, which she defended passionately.  She had a good understanding of club rules and perhaps, more importantly, the unwritten rules and codes of behaviour accumulated over the years. She could, and often did, guide the committee through difficult issues, and it was not uncommon for potential difficulties to be averted because of her steer. Margaret kept track of club records and awards and could always be relied upon to say whether a particular ride was or was not a new club record. This might mean delving into her home archive to find the answer, but she often knew the outcome at the time of asking, such was her knowledge and command of club information, right up to her passing. Cycling and cycle sport was in her veins and she was clearly often at her happiest when amongst kindred folk at cycling activities. 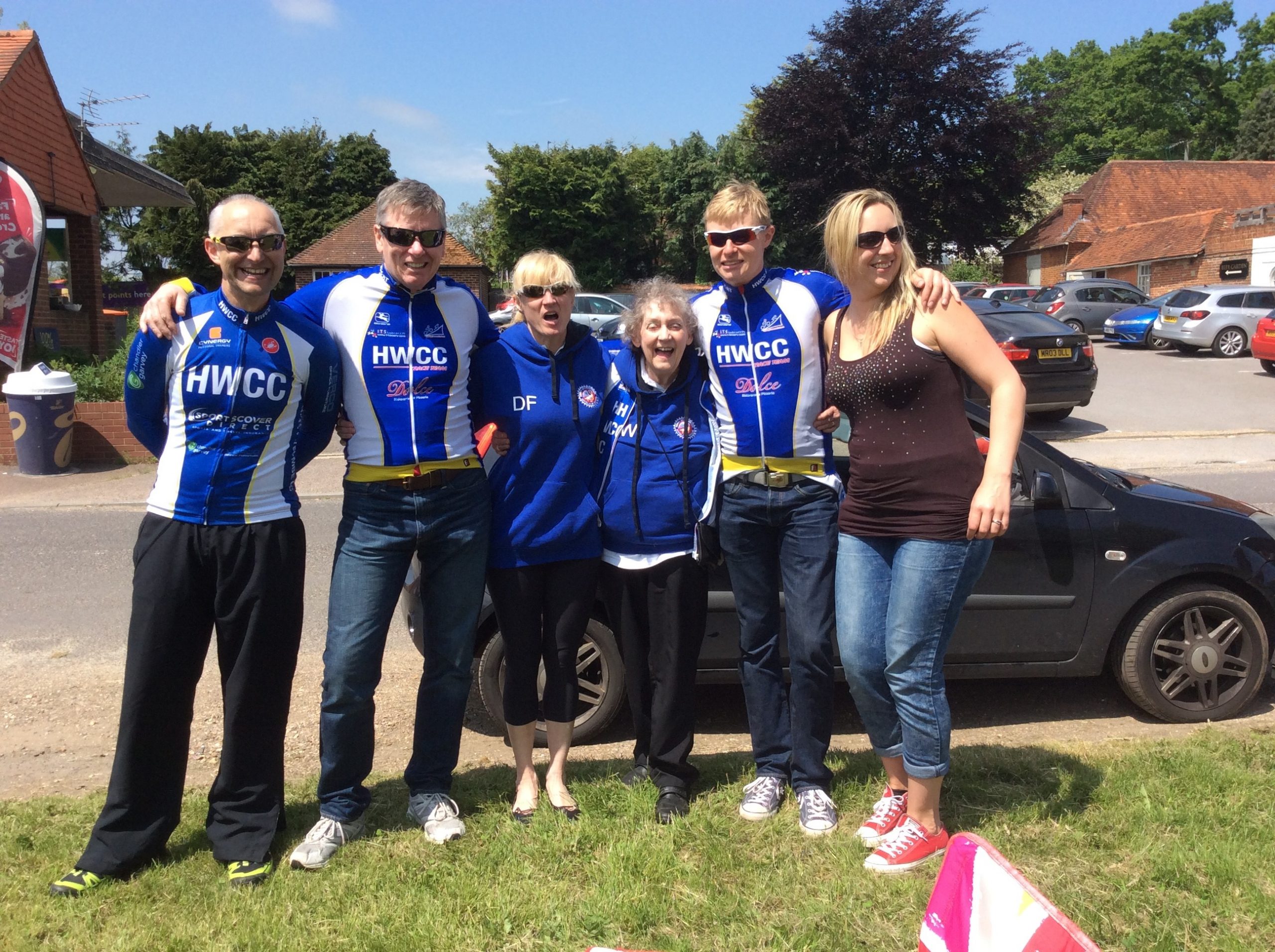 Margaret at the Hounslow 100 mile time trial in 2016. With niece Dena Ford and her husband Chris, Chairman Nigel Croxford and Dan Strange and his wife. 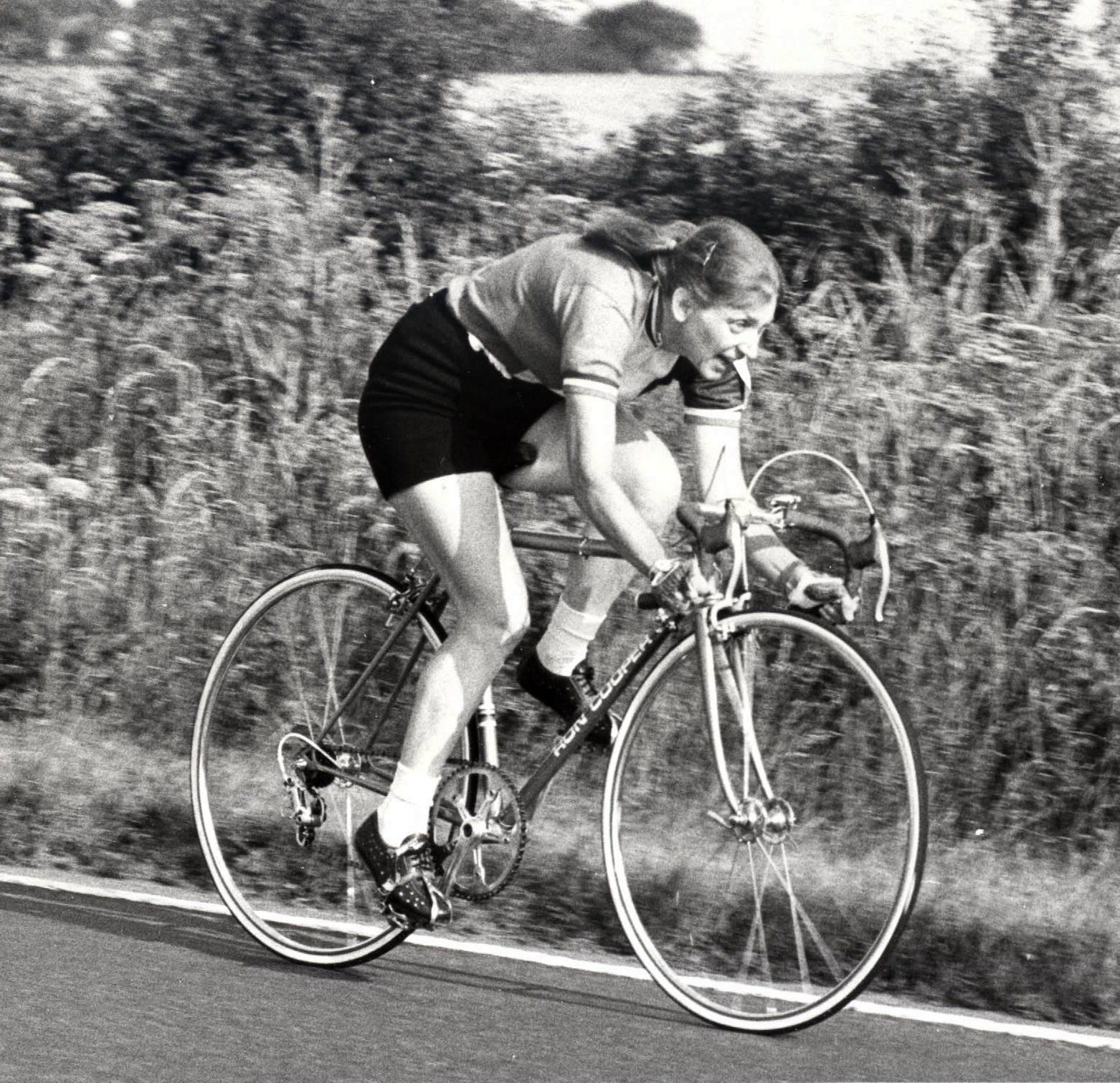 A powerful Margaret circa early 1970s 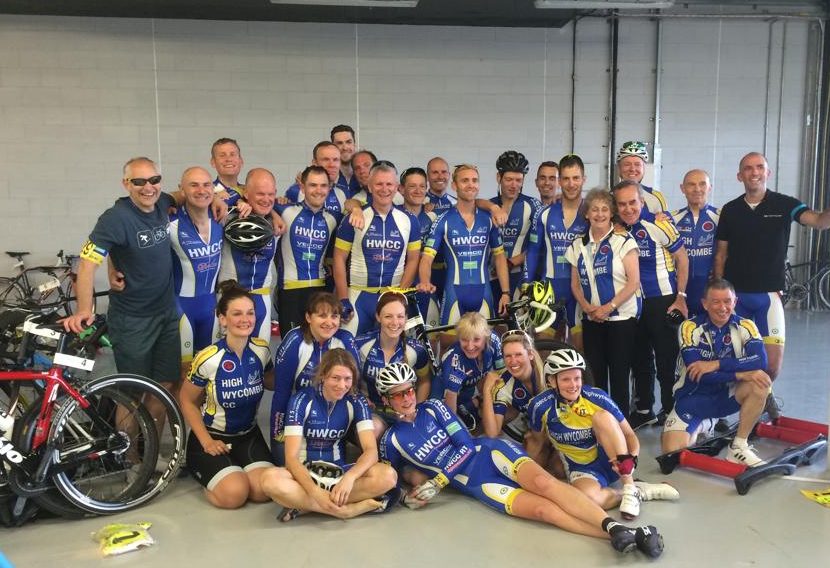 Perhaps Margaret’s greatest impact on High Wycombe Cycling Club was her being just Margaret, her contribution to the workings of the club, and her natural warm personality shown to the wider club membership. For many years she was often the first point of contact for new and prospective members. Many would go home after their first visit to West Wycombe Village Hall, having been treated to tea and biscuits fully briefed on the club, how it worked, who was who, and armed with all manner of facts about cycle sport, British Cycling, Cycling Time Trials, plus explanations of club events and open events, and more!

She first joined the club’s committee in 1965, and apart from 1970 due to a short spell in Northumberland she was a committee member up until her passing in 2018. In that period at one time or another, she had held most of the positions on the Committee apart from Treasurer and Chairperson. For some lengthy periods, she often held two committee posts and was periodically the official or unofficial Social Secretary when the club failed to appoint someone to the position. Margaret was always there to fill gaps rather than allowing activities to slide. From 1993 until 2013 she was continuously both General Secretary and Membership Secretary, and another period which included several spells as Social Secretary. She organised the club’s annual dinner and awards event on some 30 occasions in total. The first one way back in 1967 and the last in 2010, after which she handed over to Lisa Morrissey. Other social events Margaret organised over the years included the annual Christmas Party and the Fish and Chip Supper. In 1989, Margaret and her husband Gordon tragically lost their son Darren. He was 19 years old. It took the best part of two years for her to begin to show something of the old Margaret. It was cycling and club cycling, in particular, that helped the healing process. 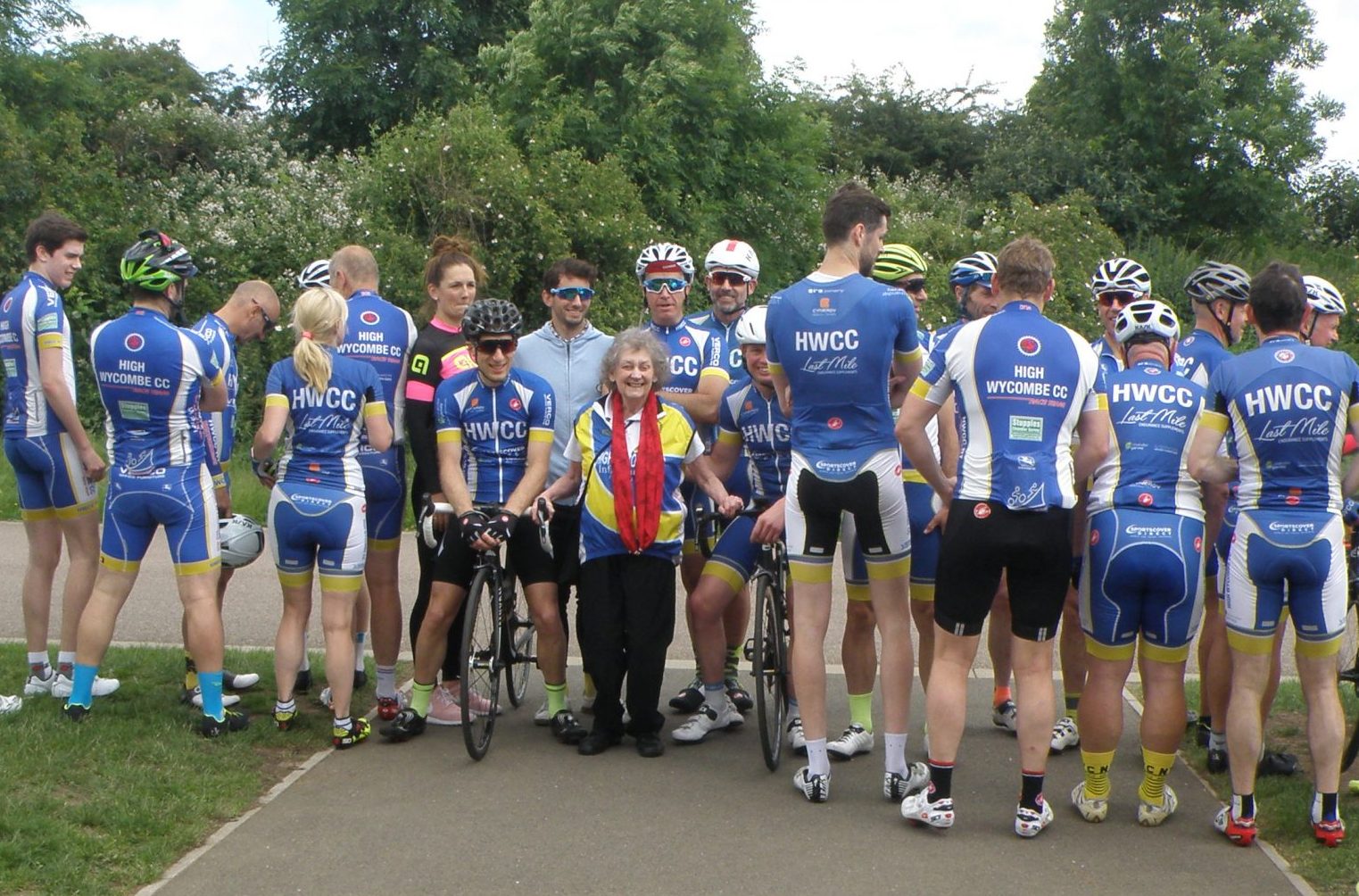 Many years earlier in 1962, it was a very shy 20-year-old Margaret King who joined the High Wycombe Cycling Club. At the time, no one could have imagined the impact she would have on the club and local cycling for the next 58 years. In those far off days, it was her athletic prowess that first brought her to prominence, and club records soon started to fall. As her cycling ability developed Margaret revealed a remarkable ability to turn gears fast and smoothly. She had naturally what the French call ‘souplesse’. She never looked to be struggling on a bike even when in full flow. The Ladies’ 10 record was the first to fall in 1963. A modest 27:52 by today’s standards. It was her first time trial, and by 1992, she had brought the record down to 23:24, having broken it several times in between. Over the years, records were broken and re-broken, some many times. One of her particularly outstanding rides was the Club’s 15-mile record which was a popular distance for ladies at the time. Margaret took the record down to 38:55 in 1964, which was only 55 seconds slower than the national competition record held by the incomparable Beryl Burton.

In total, from 1963 to 2002, Margaret broke or re-broke 58 individual club records, and when ladies’ team records are counted her name appears in the club record books 75 times. Apart from her first 10-mile record, all that followed were in her married name of Margaret Wright, including 31 times as the Club’s Ladies’ Champion spanning the period 1963 to 2003. Margaret was also a regular participant in open time trials and she won a good number of open 10s and 25s, which were her favourite distances.

Some of Margaret’s best performances in open time trials came in the 1970s when she figured highly in several national championships. By then she’d become a very strong time trialist and on her day it was only the country’s best who could beat her in short time trials. In 1974, she was placed 5th in the Ladies National 25 mile Championship and 6th in the Ladies National 100 mile Championship. Both events were won by Beryl Burton. In 1983, she competed in the VTTA National 10 Championship, which took place that year on the Marlow bypass course. It’s an event she targeted and trained for specifically over several months. Come the day and true to form she was the fastest lady vet with a short 25 minute ride. She did, however, hide the disappointment of not even getting a mention during the medal ceremony. It was all about the vets on standard and the men ruled the day!

Margaret was always there when the club organised various open road races and open time trials and she was there alongside her husband Gordon for the many events he organised over the years.  Many an aspiring club champion had bottles handed up to them by Margaret in 100 mile or 12 hour time trials at various far flung locations. Her name will for always be synonymous with Easter eggs at the Lesley Cole Good Friday Time Trial, jelly babies at club events, and cups of tea, biscuits and more jelly babies after evening time trials at Longwick. No matter what time a rider might have done, she would offer commiseration or congratulations in equal measure. She struggled with health issues in her last two years, but it did not deter her from always being present at club events and activities with a helping hand. On Tuesday, the week before she passed away, she was at Longwick Village Hall making teas and offering her usual encouragement to those that needed it. On cue, the jelly babies were on the counter, as they will be for years to come as a reminder to all who follow that so much was owed to this remarkable woman.  We will never forget Margaret. She was a Wycombe Club cyclist through and through, and there to the very end. 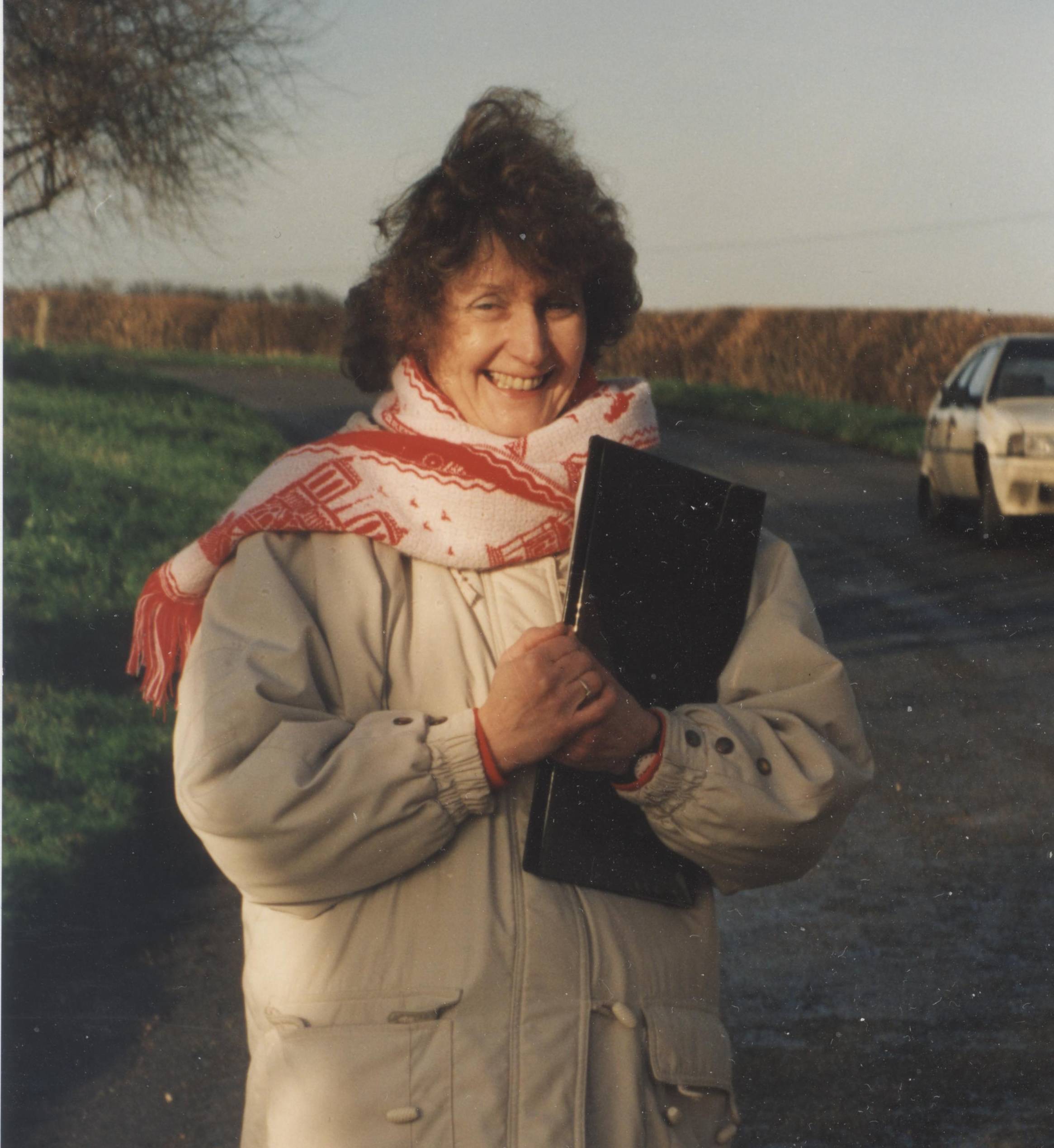